Bitcraze does not manufacture Motion Capture systems, but there are many variations available on the market, for instance from Qualysis, Vicon and Optitrack. Most mocap systems are supported by the Crazyflie ecosystem or can be integrated with it. 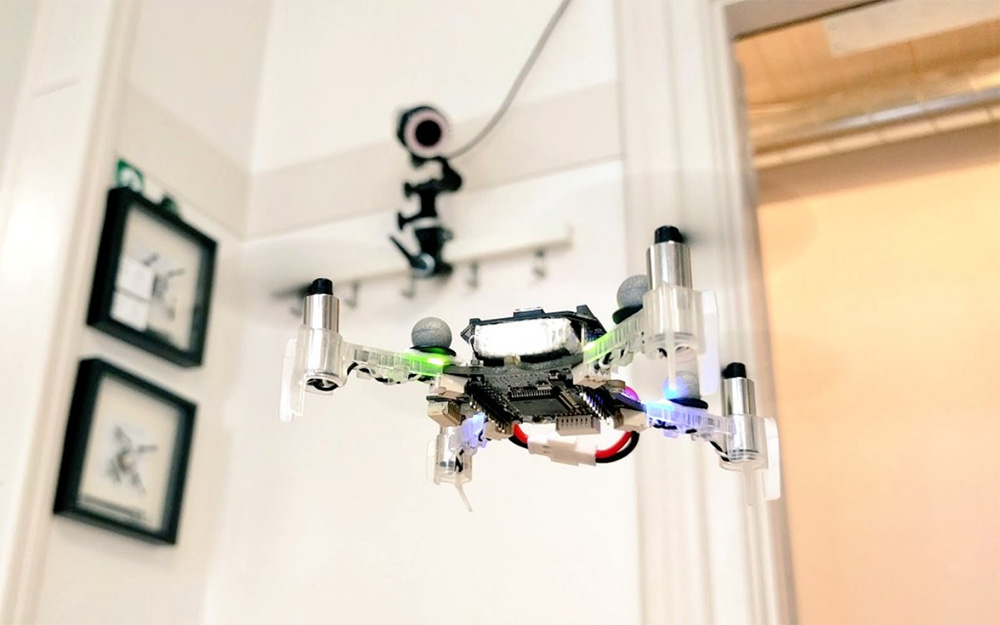 Motion Capture Systems use cameras to detect markers attached to the object that is tracked, in our case a Crazyflie. The position of the markers on the object is known by the system and that enables it to calculate the position and orientation of the tracked object in a global reference frame.

Data from the cameras (from a few up to over a hundred cameras depending on the space to cover and other requirements) is fed into a central system that does the calculations and estimate the positions of the markers and tracked objects. In the typical Crazyflie use case, the position of the Crazyflie is then transmitted via a Crazyradio to the Crazyflie to be used in the control loop.

If many Crazyflies are used at the same time (swarming) scalability may be an issue since the position of all Crazyflies continuously must be transmitted. The Crazyswarm project solves this in an efficient way though and can handle 50 Crazyflies using only 3 Crazyradios.

For a swarm of Crazyflies it is hard to create unique configurations for all Crazyflies, and another strategy is to continuously keep track of all objects and their movements to enable traceability back to their starting positions, and indirectly their identity. 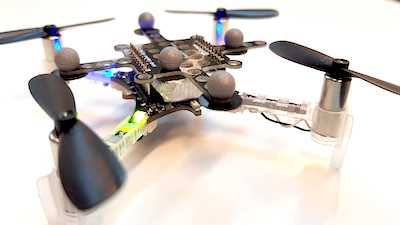 The most common type of markers are reflective spheres, also called passive markers. The cameras uses IR-flashes to light up the scene and detect the reflections from the markers. Another option is to use active markers, which is LEDs on the tracked object that emits light. Active markers can be used on a longer distance, but the drawback is that they require a battery, obviously this is not a problem on a Crazyflie that has a battery anyway.

Qualisys, one of the Mocacp manufacturers, has a technology where they also add identification to the active markers by turning them on and off over time. This enables the system to uniquely identify a marker as well as objects, even though there are multiple object with the same pyhsical marker configuration, as long as the ids are different.

It is possible to glue markers to a Crazyflie but we have developed two types of marker decks to simplify the task of using the Crazyflie with MoCap systems. The first is the Motion capture marker deck  which is a deck where passive markers easily can be attached in various configurations. The other is the Active marker deck  which has 4 IR-LEDs that can be configured in various ways. Together with a Qualisys Mocap system it also provides the possibility to transmit different ids for each marker.

For more information on how to combine the components of the Crazyflie ecosystem, please see the Buyers guide.

Getting started with MoCap

Crazyswarm handles large swarms of Crazyflies together with MoCap system and is ideal for research applications, read more about USC’s Crazyswarm.