Unlike CRTP, CPX might not be low latency. Where CRTP handling is fast, no-blocking and handles small packets, CPX packages can handle larger packets, communication is mostly blocking and if a MCU/host is overloaded congestion will be created.

The protocol is meant to be a base, where application specific protocols can be implemented on top of it. There’s a few examples of this, like the AI-deck WiFi image streamer and the GAP8 bootloader.

CPX is a hybrid of a packet and stream protocol. Packets below 30 bytes are delivered in one chunk, but larger packets can be split up and delivered as a stream of chunks where a header flag identifies the last chunk of the packet.

Packets are delivered in order, as are the chunks they might have been split into. That being said the packets and chunks might be mixed in with packets and chunks from other sources and/or other functions. If any target along the way becomes overloaded with data, it will stop accepting new data and create congestion up steam. Packets will not be dropped, but might not be delivered in a timely fashion.

Since CPX is meant to be sent between different MCUs/host it can be implemented on different transports. As long as the basic principles still stand, the transport doesn’t matter.

Today there’s a few transports implemented in different parts of the Crazyflie: 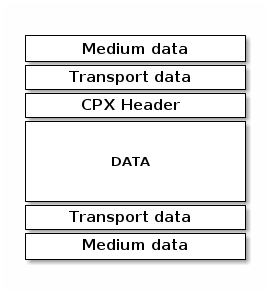 As the packet moves up/down the stacks on each target data is added/removed and the user only interacts with the CPX part of the packets.

The header for a CPX packet has the following format:

There’s also a pre-defined set of functions, but others can be implemented if source and destination is in sync:

CPX supports a number of physical medium as well as various MTUs for them.

CPX support a number of transports as well as various MTUs for them. Each transport will add data to the packets to be able to transfer them via the link, this data will not be the same for different types of links.

The packets for the UART transport link (ESP32 <> STM32) has be following format. The MTU for the UART is 100 bytes (this includes CPX Header and DATA). 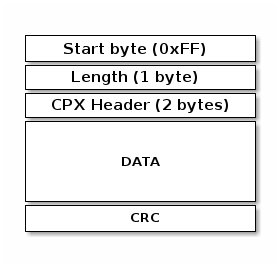 There’s no pins for flow control on the UART, instead the a special message is used to avoid one side overflowing the other. For each packet received, the receiver will send back 0xFF 0x00 (i.e a packet of size 0) to signal that the packet has been queued and the sender can send the next one.

The packets for the SPI transport link (ESP32 <> GAP8) has be following format. The MTU for the SPI is 1022 bytes (this includes CPX Header and DATA). 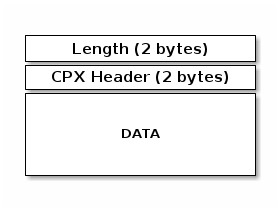 The packets for the WiFi transport link (ESP32 <> HOST) has be following format. The MTU for the link is 1022 bytes (this includes CPX Header and DATA), but the actual transferred data per packet will depend on the underlying TCP data. 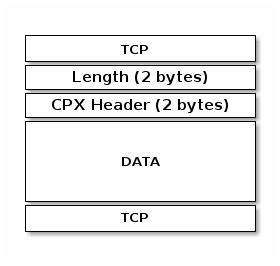 The actual transferred data per packet (i.e what you would get out when receiving on the host) is not defined and depends on the underlying TCP/IP stack. So when reading the socket it’s important to keep reading until you have received the correct amount of data.

As mentioned above CPX supports splitting packets into smaller chunks. The reason for this is that not all MTUs are the same size, so a large packet might be split into smaller chunks to be sent over a transport that has a smaller MTU.

When packets are split, the LP (last packet, see above) bit is set to 0 for all the chunks except the last one, where the previous value is preserved. This means means that there’s support for splitting already split chunks.

The destination will have to re-assemble the packet as it seems fit, but this will be a higher level protocol issue.

The CPX implementation is split across multiple targets, repositories and languages. That being said we’ve tried out best to synchronize the APIs, but there will be differences to please double check the implementation in the repository where you’re working.