One of the key components of getting serious about developing on the Crazyflie, is to dive into the C-based firmware. If you want to do some major changes to the intrinsics of the code, it is essential to have proper tools to be able to debug the code (place breakpoints, read real-time values etc...). On this page, you can find examples on how debug the STM32 from VS Code and Eclipse. Debugging the nRF51 chip requires a different configuration, but an otherwise identical set-up.

Debugging in VS Code Connect the the Crazyflie to your ST-Link V2 via the Debug Adapter and the port on the underside. You don’t need to solder the second adapter to the drone if you’re only planning on debugging the STM32F405 with the crazyflie-firmware.

These steps have been tested on Ubuntu 20.04. The link to gdb-multiarch is required because Ubuntu does not ship arm-none-eabi-gdb anymore, but the new gdb-multiarch that supports all architecture.

If you do not have vscode yet, the easiest way to install it on Ubuntu is via snap using ‘Ubuntu Software’ of by typing:

You will also need to add the debugger to the udev rules if not already done - for this you can check with lsusb what the ID of your debugger is (for an ST-LINK/V2 it should be 0483:3748). Then you can add it to a rules file, for example for the STLINK/V2 you could append the line

Configure your Machine for WSL and install a Ubuntu Distrobution. Instructions can be found here: https://learn.microsoft.com/en-us/windows/wsl/install. It has been tested on Windows 10 and 11 with Ubuntu 20.04 as well as Ubuntu 22.04.

Clone the crazyflie-firmware, build and upload it to your Crazyflie

Clone the firmware from github to your local WSL filesystem

Move in the project directory

Make the .config file from defconfig

Compile the project (-j 16 means use 16 threads, 2 x processor cores is a good rule of thumb)

Upload the code to your Crazyflie by typing

Make sure you have Visual Studio Code installed in Windows, do not install it in WSL! Get it here: https://code.visualstudio.com/ Once you have VSCode installed under Windows, go in WSL, cd into the crazyflie-firmware folder and execute the following command

You should now see WSL Ubuntu installing the VS Code Server program. Shortly after, VSCode under Windows will launch with a remote connection to your WSL folder (green box down left).

NOTE: Note: In addition to the Arm-Cortex Debugging Extension (Version 1.2.2!), which is installed later in this instruction, you should also install Microsofts C/C++ Extension Pack and its recommended Extensions.

In contrast to make cload, which uses the windows programs to interface with usb devices such as Crazyradio PA, the openocd wants to communicate directly in WSL with your ST-Link V2. So it’s not sufficient to just connect it to your Windows machine, you also have to attach it to WSL. For that we need to install USBIPD on Windows.

Now make sure that it is connected to WSL by listing all usb devices with lsusb Currently only the Superuser has read/write access to that usb device, change that by

The link to gdb-multiarch is required because Ubuntu does not ship arm-none-eabi-gdb anymore, but the new gdb-multiarch that supports all architecture.

First ensure that you have the ARM GCC toolchain and OpenOCD installed and in your path. To check, run:

The path to your OpenOCD binary and ARM GCC binary should output. If not, try installing them again.

Install the extension either by clicking “Install” on the web page, or by searching “Cortex Debug” in the Extensions tab of VS Code.

Click on “Run”, then “Add Configuration”, then “Cortex Debug”. This should automatically create the needed “launch.json” file.

The version of cortex-debug tested here is 1.2.2

Unfortunately it is possible that newer versions of this Extension won’t work with our current setup, so please downgrade to 1.2.2 . You can do that by going to ‘uninstall’ and ‘install other versions…’.

It should also be noted that VSCode updates Extensions automatically, sometimes even if you manually downgraded to a legacy version. If you don’t want that to happen, make sure you have checked the setting Ignore Updates in the dropdown menu of Update to vX.X.X.

Inside of the file, replace everything with the following:

Note: Debugging an App To debug an app, make sure to change the “executable” to “”${workspaceRoot}/examples/app_hello_world/build/cf2.elf”, or to which app you would like to debug. You can add your app debugger as a separate configuration.

Note: Debugging thread aware To debug thread aware you need to add "rtos": "FreeRTOS" to your configuration in the launch.json file - however, while this can be very handy we also occasionally experienced some issues with setting breakpoints while using this configuration.

Now for the SVD file: just download it from here and into the firmware root dir. Make sure it has the exact name of STM32F405.svd !

After setup, go to the ‘Run and Debug’ tab of VS Code (on the left sidebar, the icon with the little bug next to the play button), select the chip you want to debug from the drop-down menu at the top of the pane, and hit the play button!

NOTE: Make sure your executable (cf2.elf) is identical to the one running on your Crazyflie.

If you followed everything, it should start running nicely and look a little something like the image below. Notice the nice peripherals pane at the bottom, along with the variables pane at the top. Awesome, now you can code and debug all within VS Code! Then install Eclipse itself: Go to their download page: Eclipse 20 and then go into you download folder and unzip the file.

and start up Eclipse:

The rest is the same as for Linux. Make sure that the arm-none-eabi-gcc is properly installed and its path is configured in the debug configurations.

First import the crazyflie-firmware into Eclipse:

Now input the following settings in the debug configurations: 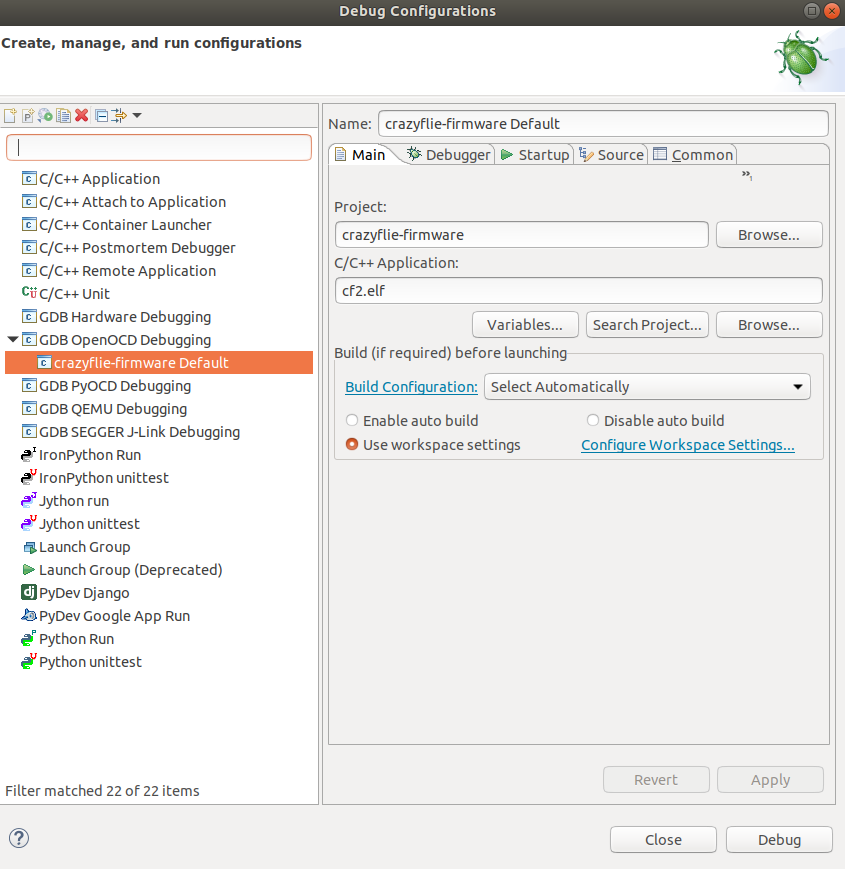 Insert the filepath to the cf2.elf file to C/C++ Application. 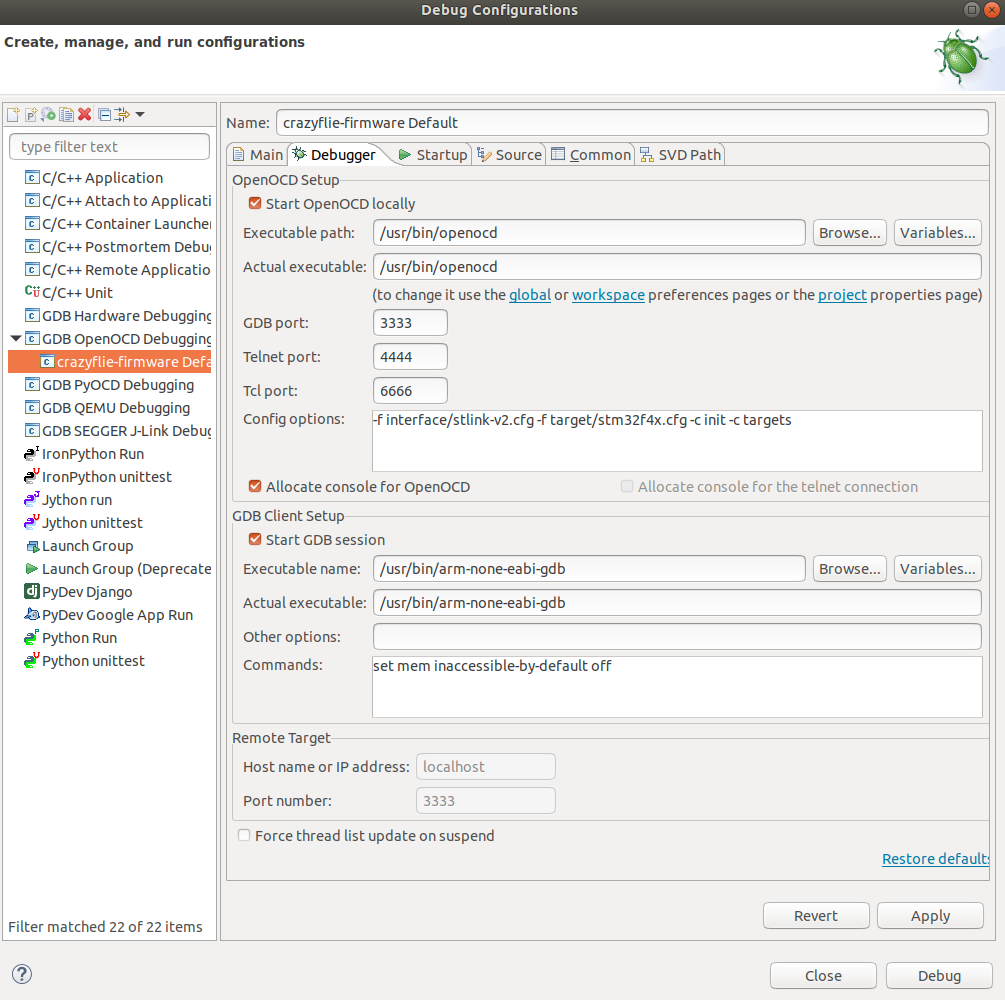 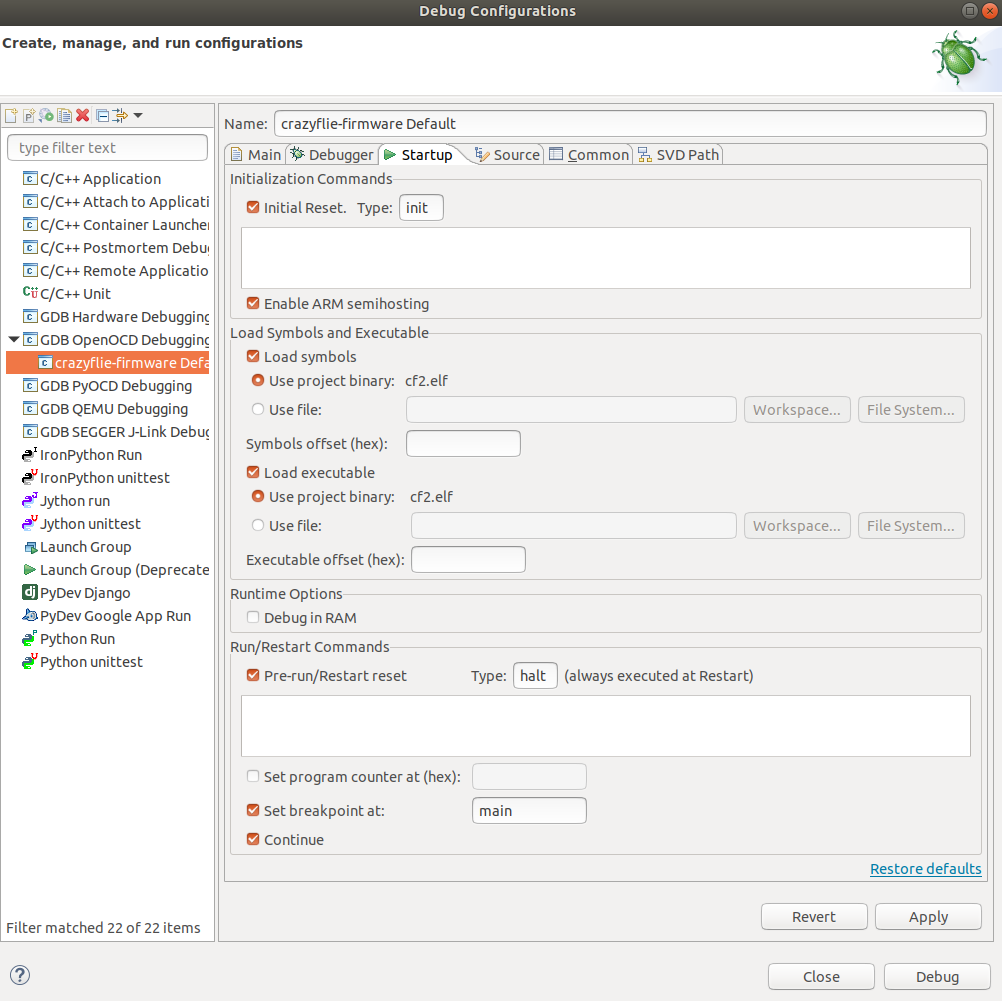 If you don't see any errors, Eclipse should go to an dedicated debugging environment automatically and it automatically halts the crazyflie's firmware before it goes into the main function of src/init/main.c. Press F8 or Run > Resume to let it continue and place a breakpoints anywhere in the code (double clicking just in front of the line in the gray area or press Shift+Ctrl+B). Now you should be able to read out the values of the defined variables at that very position.

NOTE: Make sure your executable (cf2.elf) is identical to the one running on your Crazyflie.