This page contains terminology and definitions for the lighthouse system to make it easier to understand and discuss algorithms and code. Our definitions probably do not match the ones used by other software packages, but we find these suitable for our setup.

There are a number of different reference frames (or coordinate systems) used.

The global coordinate system is fixed in the room and shared by all parts of the system. This system is used for absolute position references in set points and the kalman estimator.

The base station coordinate system is defined as 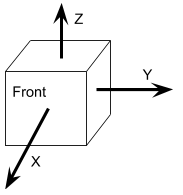 There is one (LH2) or two rotors (LH1) in a base station. Each rotor is rotating around an axis of rotation, r. We define a coordinate system for the rotor where the Z-axis points along r and the X-axis is the same as the X-axis of the base station. 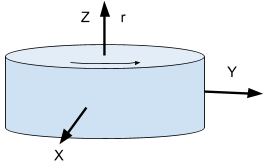 The axis of rotation is defined such that when r is pointing towards you, the drum is spinning counterclockwise.

In relation to the base station reference frame we have

The coordinate systems for the horizontal LH1 rotor and the LH2 rotor are identical to the base station reference frame.

Rotation angle α=0 is forward, along the X axis in the rotor (and base station) reference frame. 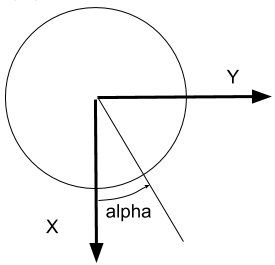 Note: In LH2 the two light planes are offset from each other on the rotor by 120 degrees, but this offset is compensated for in the decoding part of the firmware. For a sensor placed along the X-axis, the measured α=0 for both light planes.

There is a lens on the rotor spreading light in the form of a plane, rotating with the rotor. In LH1 the plane is oriented along the axis of rotation, sweeping the room when the rotor spins, while LH2 has two light planes that are tilted by an angle ±t. t is defined such that the plane is rotated counterclockwise with increasing t, seen from the front of the base station (α=0). 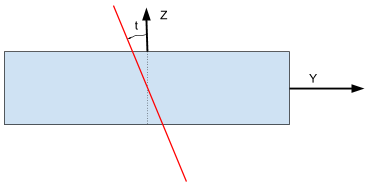 In the general form we have no tilt for the rotors of LH1, in LH2 the planes are tilted 30 degrees.