Last summer we were sitting in a meeting room after office hours discussing how we should react to the fact that a lot of people seemed to want to buy a Crazyflie. After having a bit of down time in the project we finally posted a video, that was already about 6 months old, on Youtube.  It was during the spring 2011 showing us flying the first prototype Crazyflie. After getting picked up by Hackaday it got a lot more attention that we originally thought and a lot of people wanted to buy one which was great! The only problem was that we only had three of them and at this time there where already obsolete components. Another problem was that the motors/propellers were scavenged from toy airplanes (they had a sale and we got them cheep) which was not a scalable sourcing solution.

So sitting in this meeting room we decided to give this project a shot by trying to release a kit that could be sold. Back then the development was funded by Epsilon, the consulting company that we are working for, which was not optimal if we wanted to commercialize the Crazyflie. So we decided (after a lot of discussions) to form a company which became Bitcraze AB (the name came after even more discussions). We needed a company to make manufactures and distributors take us seriously and for import and tax reasons. It is also pretty satisfactory to be on the board of director of our own company :-).

At this time the Crazyflie was already flying but it had to be redesigned, parts sourced and we needed to find someone to manufacture it for us. Since we didn’t (and still don’t) have that much capital this wasn’t something that we could leave our day-jobs for so the development continued on weeknights and weekends. As anyone working with product development (specially if it includes any type of hardware), going from a prototype that is working to a final product requires a lot of work.

A big obstacle for us was sourcing the mechanical parts: Motors, propellers, motor mounts and battery. Some of these can be found and some are harder. And even if you find something that looks good on paper there’s no guarantee that it’s very good or working at all. We got some motors that seemed like they were scavenged from the junkyard (and probably were), we got batteries that didn’t meet the specification and propellers that were unbalanced. All this takes a lot of time. Finally we had to design a motor mount ourselves since we couldn’t find anything that suited our purpose. After a lot of searching/testing we finally found good batteries and motors. The propellers are still a bit hard to find a reliable source for but we think that we have it sorted out.

Even though it’s been very frustrating at times, like when the Invensense gyros we were using went out of production, we have a lot of fun when we work (which you can hear in the videos). Also we have been challenged to learn new stuff and got to try things that we normally would’t do at work. One of the reasons we started the project at all back in the fall of 2009 was that we wanted to do something more challenging and we think that we achieved that :-)

So what’s the plan for the upcoming year? Well, the main plan is to release the kit soon of course! After that there’s a lot of ideas of what we want to do so we will have to see how things go. Also we would like to thank everyone that’s been following our progress and supporting the project! 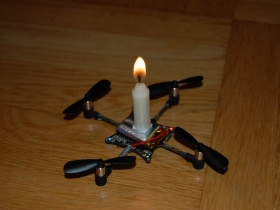 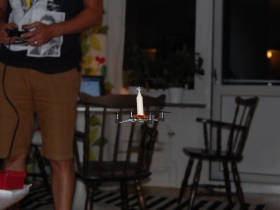 No, the candle isn’t burning when we are flying…although we did try to…

7 comments on “Bitcraze turns one year”