On Wednesday we assembled and tested all of the kits in the pre-series. We ran though the production tests, that will be used once the kits are produced, as verification. Since we can’t test that they really can fly the test isn’t covering everything but it checks most of the components. One of the units had a solder-bridge between two of the MPU-6050 pins and our tests showed that the unit was faulty. We are glad our tests caught the problem and removing the short fixed it.

The assembly doesn’t take too long and once you have done a few it’s fairly quick. We timed the last one we assembled and it was finished in just under 10 minutes (including fixing errors that were made :-) ). And that time was done by the worst solderer of us! As long as you are a bit steady on you hand it should be ok. It was a really great feeling unpacking, assembling, testing and then directly flying them! We numbered all the units and will track them if there’s any problems. So during the next weeks we will be flying a lot :-). We cross our fingers that they will hold up to what we expect.

The change we did where, connecting the motors directly to the battery and not through the power management chip, turned out great and we could feel the 8% increased power difference (it might have been some placebo effect but it just feels great).

To sum it all up it was a great night and we are really happy with the results! We remember in the beginning when we had to be in a pretty big room to be able to fly the Crazyflie at all and now it’s so stable you can (if you are brave enough) hover it 10 cm in front of your face and then push the throttle and it swishes away!

As for the project progress we are now discussing with Seeedstudio on how to carry on and we are trying to sort out the motor mount problem and some smaller issues.

We’ve also spent some time creating a new page on the wiki describing the hardware. It’s still a work in progress, but there’s a lot of information. We will continue updating the wiki whenever there is time.

Head over to our Picasa albums for more pictures. 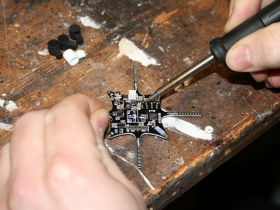 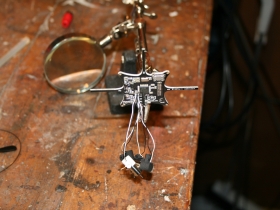 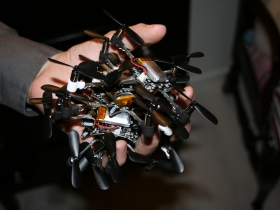 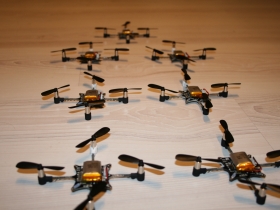