Like we wrote last week we have been working on testing ST MEMS and comparing the performance to our current MPU-6050. Last week we had the sensors in place and were flying with them, this week we added a uSD card so we can  log them and compare them offline. Before we added the uSD card we had a discussion on how to easiest log the sensors simultaneously. Since the current logging framework isn’t made for this kind of high speed logging we thought about regressing back to our old logging for this test. In the old logging we packed as much data we could into each radio packet (31 bytes) and just sent it to the PC at a high rate. Instead of being a generic solution, like we have now, this requires changes in the client/firmware to change any variables logged. Even if we changed to this scheme we weren’t sure if the radio link would handle it. The idea was to log about 56 bytes @ 500Hz (~28kb/s) which would be accelerometer/gyro from the InvenSense/ST sensors and a time-stamp. Since the radio link is only specified to an air data rate of 2Mbit (about 400Kbit true downstream rate), and because adding a uSD card was something we wanted to try, we decided on the uSD solutions. We also wanted the option to log more data if we needed to. It was just supposed to be a quick hack, a couple of hours….. So the plan was:

The estimated time for executing this plan was about 4 hours (we actually said about 1 hour from the beginning, partly kidding..,).  The execution was not as smooth as we planned. After working as developers for years, we still can’t avoid doing over-optimistic time-estimations. The goal with this was to be able to log all the data, but we never reached it. We encountered some of issues a long the way and the biggest one was the latency for the SD. From time to time it took > 200ms until the uSD was ready again after writing data to it. Buffering this much data was a problem. On a system with only 20kb RAM, lots of tasks (and stacks) and lots of queues to synchronize between them, it’s hard to create very large buffers. Finally we managed to allocate a ~5kb buffer, but we still had problems of it overflowing. We can’t spend more time on this right now so we have to settle for the data we have, but one day we will free up some time and come back to this.

Since most of the time was spent trying to get the data, there wasn’t much time over for the analysis. So far we can just say that the sensors are pretty similar in performance where the  MPU-6050 have a little edge. The ST gyros seems to have a little more stationary drift and noise. 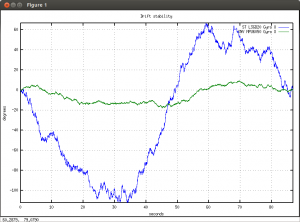 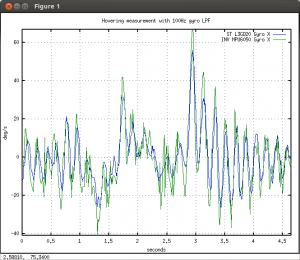 X-axis of gyro while hovering 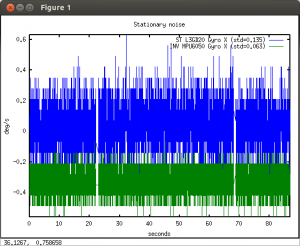