Last week was a hectic but exiting week for me. First I visited Embedded World in Nürnberg and then made a visit to TUM university in München.

I was actually visiting Embedded World because ST Microelectronics contacted us and wondered if we could do a Crazyflie version with the more powerful STM32F3 and use ST MEMS sensors. So during the winter we did some prototypes where we fitted the pin compatible STM32F303CB and a LSM9DS0 9-axis MEMS module. Porting the code was pretty straight forward and took about a week. It was manly the drivers that needed porting but getting the FPU running also took some time. Our quick bench-marking test showed an ~35% increase of the floating point intense code and by using further speed boosters like the core coupled memory (CCM) it could probably be increased a lot more. Right now these extra CPU cycles aren’t really needed but for the future when more complex sensor fusion algorithms might be used they will be valuable. Therefore the STM32F3 series it very interesting as it packs plenty of processing power in a small package.

Having the ST-prototype on display in the ST booth at embedded world was quite a strange feeling. Something that started out as a fun thing to do on our free time is now sitting on a wall at big cenvenstion as EW, kind of hard to grasp. Unfortunately we where not allowed to fly around and play with it due to restrictions but I had a great time there anyway. I also participated in a short interview which ST arranged, really strange seeing yourself like that. I should probably focus on my engineering career instead… :-)

After the EW I went to visit the Techische Universität München TUM, as one of our most active users Oliver is studying there. Oliver made an awesome HUD and also contributed with most of the altitude hold code, and since München only is an hour away by train it was a great opportunity to go visit him. Oliver arranged so that Jacob from the computer vision group invited me to their department where they demonstrated some of their work, especially their work done with computer vision and quadcopters. Amazing stuff! I really hope we can do something together in the future and make this technology widespread. 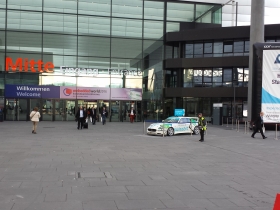 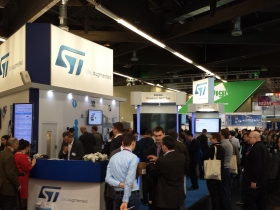 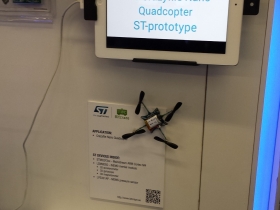 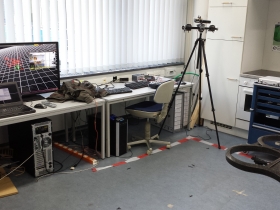 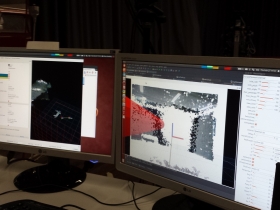 4 comments on “Visit to Embedded World and TUM university München.”