When working with hardware there’s always a very intensive phase when you do the initial design, find the correct parts and finally order your prototype. Then you sit around waiting for a month or two until the board shows up with the mail. For a first prototype there are always errors, so you want to minimize the time before you do another round of prototypes. Already during the work with the initial hardware design we use various development boards to check that we won’t run into any problems. Normally there’s something you didn’t think about and there’s always something ugly that shows up in the errata. To test some of the hardware you might need a lot of firmware, like how well do the sensors work when flying. To speed things up we normally continue the development using our hackish set-up of development boards even after the prototype is ordered. This way we have made lots of progress with the firmware until the first prototypes show up.

Since we did a lot of changes for the Crazyflie 2.0 we verified many things already before ordering the fist prototype, but for others we needed more firmware and we didn’t have the time do finish it all. So after ordering we continued the development using our initial set-up. It contains roughly the same sensors we use in the final design and also the two MCUs (STM32F405/7 and nRF51822), everything is wired up using roughly the same pins and buses we have in our design. While we were doing more work on the firmware we found a couple of errors we made in the hardware that we needed to fix when the prototype arrived. Finally we had the old firmware ported and running on the STM32F4 and some new firmware for the nRF51. Together this built up almost a complete system which we could connect the client to and log data from the sensors. Obviously there was one thing we couldn’t really test, the actual flying :-) 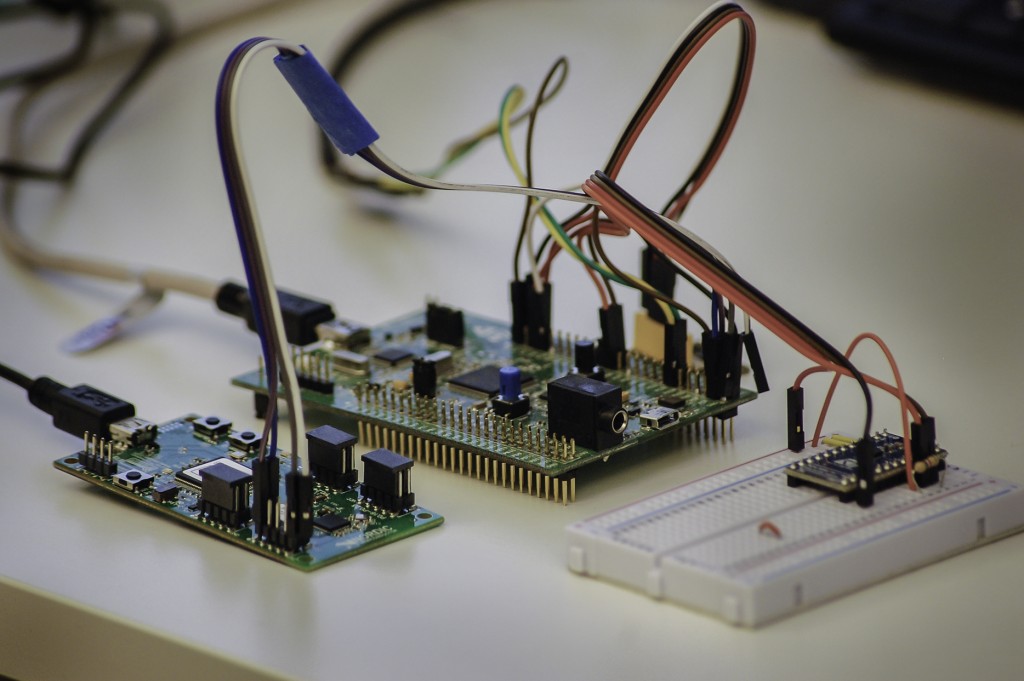 Finally the new prototypes arrive. If you have been in this situation before you recognize the feeling, it’s great! Even though we had the firmware working we didn’t want to start trying to flash it, there was probably other issues we haven’t found. So we had also prepared a blinky program which just starts the oscillator and blinks the LEDs. While taking small steps it’s a lot easier to find out what went wrong. After successfully blinking the LEDs we got a bit more confident and flashed the full firmware, and it was working! But then we already knew about the error that kept the STM32F4 in reset and had patched it :-) After attaching the 3D printed motor-mounts for the new 7mm motors and fixing the PWM we gave it a try. Crash! A bit too optimistic.. we fixed the sensor orientation and it was finally in the air. After a quick glance at the clock we realized that it had only taken 8 hours from ripping the package open (yes, ripping) until we had the first prototype of the Crazyflie 2.0 in the air. After a couple of days all the hardware was tested, the changes were made and a new prototype was ordered (which coincidentally showed up today).

So where’s the video of it flying? It’s still in the making. This fall we are very happy to have the help of Mattias that is doing an internship at Bitcraze. He’s worked with media and graphical design before, so you can expect images and video with better quality than we normally manage to produce :-)