The logical move was to add a similar amplifier on the Crazyradio dongle and that is what we did. We made Crazyradio PA (power amplifier) and we intend to release it with Crazyflie 2.0 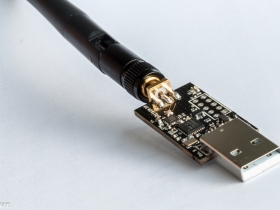 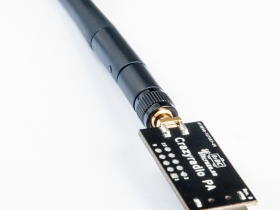 The output power is now of 20dBm for Crazyradio PA, which will dramatically increase the control range. Even though Crazyflie was originally intended for indoor use, Crazyflie 2.0 is pretty capable outside, mostly with the expansion capability that could allow to add things like GPS, so the extra range could be put to use. But maybe the biggest advantage is indoor where Crazyradio is now playing equal with Wifi in term of TX power. This increases the link robustness and allows for flying in other rooms (could be useful with a powerful FPV for example).

Preliminary tests show much better performance compared to the first Crazyradio and Crazyflie both indoor and outdoor. So far, we mesured a stable link two floors down about 20m away indoor and about 150m outside range (the uplink has been tested up to 450m). Of course we are continuing to work on it and final specs will come later.

As for the radio dongle mechanic we have changed nothing: the connectors and LEDs are still at the same place. This was made possible by using smaller SMD components and so existing 3D-printed cases for Crazyradio still work for Crazyradio PA.