As you might already know we have added a 20dBm RF amplifier to the Crazyflie 2.0 as well as to the Crazyradio PA. We have had high hopes of getting a more stable link and much better range with this. We have done a lot of tests in the building we are sitting in and already experienced a big improvement in range. However radio range is a tricky thing as it depends on so many things and when we have tested it outside of the office we could only get a stable link for about 80m. This is very different from the documents we read where we could expect up to a kilometer of range! Maybe the fifteen wifi networks that where present outside our office played an effect.

So this weekend I set out to do some test on the country side. I packed my bag and mounted the Crazyradio PA on a 1m stick which I put in my bag so it could reach higher than my head. Then I took the bike to get to the country side. I got a lot of strange looks while bicycling. It was first when I reached the country side, it came to me that bicycling around with an antenna sticking out your backpack might be interpreted the wrong way :-o. After a while I reached a good spot and decided to put the Crazyflie still somewhere and instead take the computer with me so I could see what was happening. As the nRF51822 can take RSSI measurements we made a simple python program where the computer pings the Crazyflie and the Crazyflie responds with the RSSI measurement. We save the data in a CVS file which can be plotted in real time. I hang the Crazyflie in a bush, started the Crazyflie 2.0 at channel 10 and 250k air data rate, fired up the plot and took the bicycle and started pedaling.

After 100m I still had a solid connection, very good sign. After 500m the RSSI had dropped to about -80dBm but still a stable connection. After 1300m it got really shaky, about -100dBm, as the line of sight was obstructed by some trees and the road turned as well, 1.3km, LOS, that’s a huge improvement from the 80m we got back at the office. We know these circumstances are very optimal but at least it shows us we are not way off and hopefully we can expect half of that range in a more real situation. We have still not tuned the matching network for the antenna, which we will do soon, so hopefully we can expect yet another improvement. I also did a test with a hacked Crazyflie 2.0 with a duck antenna. With this one I got about -70dBm at the same 1.3km spot. This could be a great hack for special applications that require long radio distance as it could probably go beyond 2km range LOS, both up- and downlink. 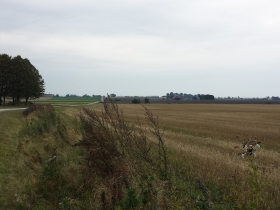 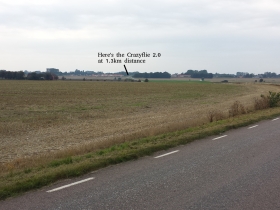 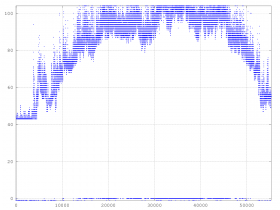