We kicked off the Crazyflie 2.0 production about one week ago and we are still working hard on ensuring the best possible quality of the production. To do so we have a test specification/plan that is executed on all the produced units. Making test protocols is something we have had some experience of in our former day-jobs, but it is always a challenging and time consuming task. However the reward is great, good tests ensure good quality to the end user. The higher the production quality is, the happier everyone is, and the more time we have to do other things like developing new features :-).

The tests runs on an assembled PCB and first thing to verify is an electric test checking that voltages and current consumption are normal. Then the board gets programmed.

For the original Crazyflie, the testing was heavily based on the power on self-test. This is still the case with the Crazyflie 2.0 which allows to make sure that everything is working in factory as well as every time a Crazyflie gets powered (this power-on-self-test is the first thing to run before assembling the Crazyflie).

For Crazyflie 2.0 we also needed to create new tests for the expansion port. First of all we needed to check that the connector is mounted properly and that the pins for the expansion port are able to pass though the PCB. Secondly we also have to test the electrical connectivity. For this we have created a special expansion test board which, allows the Crazyflie to self test all expansion connections. This board is detected by the 1-wire memory which is mounted on the test board. When it is inserted it will automatically trigger the test code which checks all connections.

To do tests on a limited budget you will have to get creative. E.g. to do output power and frequency test for the radio communication on the Crazyflie and Crazyradio we are using the rfExplorer. It is a neat cheap 2.4GHz spectrum analyzer that we control from Python which can measure the radio frequency and output power. ICT or bed of nail tests are also very expensive and instead we use test fixtures with pogo-pins to test the electronics. It doesn’t get as extensive as a net checking ICT but with some clever testing using the software most components can be tested anyway. We have added some photos of the original Crazyflie test rig to this post. We will soon travel to the Seeedstudio office in Shenzhen in China and we will take photos of the new production and test equipment. 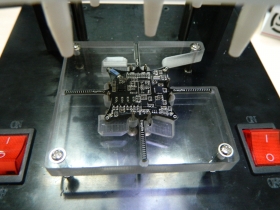 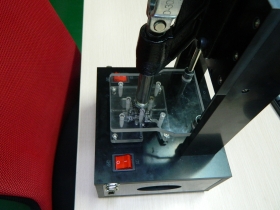