This week is going to be an exiting week! Crazyflie 2.0 has started to ship and we are pushing out a lot of code during the week. We wish that we would have gotten more time to work on the code before releasing it, but all three of us have been really busy with production. With the first units now shipping we can finally switch focus to software and documentation. Since there’s quite a few source code projects we are releasing, they each get its own bold headline below. As we role out the different releases we will update this post and post the link in social networks. 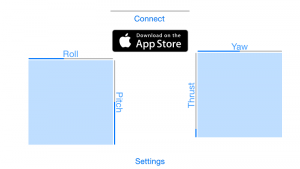 This is our first ever iOS app, and it’s just been released. It got accepted just in time and you can get it from the AppStore, free of course. Currently it is pretty simple, you can connect to a Crazyflie 2.0 and fly it with thumb controls. There is a settings menu where you can adjust sensitivities and configure mapping. The app is all open source and the code can be found here on Github. 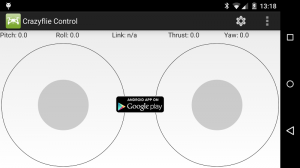 This is more or less the same as the client that has been available for the Crazyflie Nano Quadcopter, but now we have added Bluetooth LE support. Since this app has been manged by our community member Fred for a while it has more functionality then the iOS app, such as tilt control. One cool feature is that you can connect a gamepad with a USB-OTG cable to the phone to get better flight precision with real thumb sticks. The app is all open source and the code can be found here on github. Thanks to Fred Sauer the Crazyflie app has been available for a while now on the market, but now we have taken over the ownership of it. Due to a change in the certificate used to sign the app you will have to re-install the application to get the latest version (market link).

The PC client written in Python has got some new features to support the Crazyflie 2.0. E.g. the bootloader in Crazyflie 2.0 is different as it now contains two MCU. It also has a EEPROM which needs new functionality, but other then that we are trying to keep things as common as we can to make things easier. The code is all open source and the code can be found here on Github. Edit: We have made a new tag (2014.12.1), source-code is available here and a windows installer is available here.

This firmware is based from the Crazyflie Nano Quadcopter firmware and the aim is to merge the old and new code, but we haven’t had the time to do it yet. Therefore it is now located in its on crazyflie2 branch on Github. We plan to merge them together but more work needs to be done before this is possible, a perfect job for the cold and dark winter months here in Sweden.

This is the code that can flash new code into the STM32F405 MCU. Now the data comes from the nRF51 MCU over the uart, so the booatloader had to be updated. The code is all open source and will be released later this week on Github.

This firmware is completely new and handles the radio communication (Bluetooth LE and Shockburst, compatible with Crazyradio). It also handles the power management and the expansion boards 1-wire memories. The code is all open source and will be released later this week on Github.

The program to load new code into the nRF51 over the radio link. It also boots the STM32 in bootloader mode and serves as a radio gateway to be able to flash it. The bootloader handles Bluetooth and shockburst so that not only the PC client but also future version of the mobile apps will be able to update the Cazyflie 2.0 firmware. The code is all open source and will be released later this week on Github.

We have not yet had time to finalize the hardware files. We are reorganizing the kicad lib and we need to clean things up properly. The hardware projects therefor have to wait, but the schematics has been released if anyone needs to see how things are connected.

Winner of the expansion board naming contest

We have now done a local vote. We are almost hundred percent sure this voting was not tampered with. And the winner is… Flykit. So even though Flykit got a lot of “proxy” votes online it seems the local people liked the same thing. Deck finished second, strange, maybe the voters had read the online vote results… Anyway congratulations to Ramin who will receive a Crazyflie 2.0! We still have not decided if we should go with Flykit or Deck for the real expansion board name. As soon as we have decided we will let you all know.