When the schools closed for vacation last week Minc (the company accelerator where we have our office) hosted a “bring-your-children-to-work” day. The original idea came from Fredrik who works at the Swedish Arduino office (in the same building as us). One of the goals whas to let children see cool technology and to get a chance to try it out. We quickly jumped on this since we thought it would be fun for the children to fly. But we realized there was a bit of a safety problem letting Crazyflies go wild all around the place. So we dug up an old idea we had been discussing (yes, there’s lots of those..), the input-device MUX.

The idea is to allow combinations of input-devices to work together at the same time. There’s a couple of use-cases for this that we have been discussing in the past, like combining Kinect with a controller so you can take control if you loose tracking. But the most obvious one is a “learning” mode, where you could control roll/pitch from one device and thrust/yaw from another. Or having the possibility to take over control “on-the-fly” (no pun intended…) from one device to another. For us it makes it a lot easier to give a controller to people and say “Try it out!” if we can take over control just in case things start going bad.

So we started hacking around a bit and got it working, but there’s still lots of work to be done. We revised the architecture a bit for the input-device layer in the Crazyflie Python client from what we posted before. The main change is the multiplexer, which enables the user to open multiple input-devices at the same time and combine them. The other change is to connect other devices “higher-up” in the architecture, like the Leapmotion. Instead of connecting it as an input-device with a mapping, it is connected directly to the MUX and will give well scaled values for controlling. The same goes for other devices such as the Kinect and network connections (which would allow to control Crazyflie throw the client from any other software). 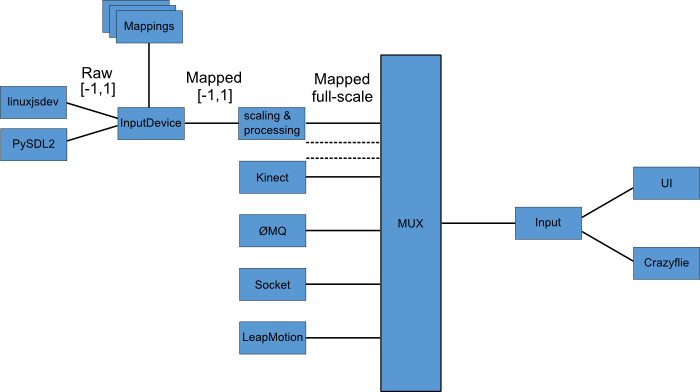 The hardest part will not be to code this, it will be to design the UI and configuration of this functionality. We have some sketches, but any ideas are welcome! In its current state you just select a MUX, then the devices that you want to use (master first, then slave). But there’s no way of configuring what values are taken from what device.

Check out this album to see a few photos from the “bring-your-children-to-work” day!