This weekend we went to the maker weekend at Hx in Helsingborg and showed off the Crazyflie 2.0 flying with the Kinect. It’s an awesome demo for fairs since it flies by itself and looks pretty good. Below is a few photos from the event. 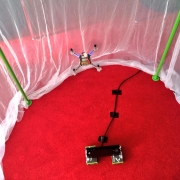 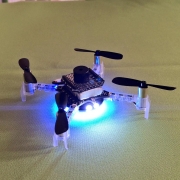 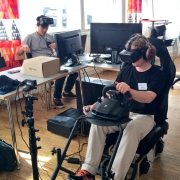 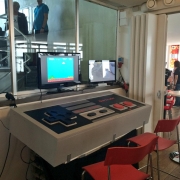 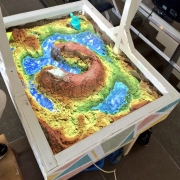 But this time we ran into some issues with the set-up. When we first developed this we were running the image acquisition and processing on Linux using libfreenect2, but we later switched to Windows. The reason is these three lines. These lines map the depth measurement to the camera measurements and gives a set of “world-coordinates”. This is needed, since the distances left/right wouldn’t be correct without taking the distance away from the camera into consideration. Without it a left/right movement close to the camera would give a much larger response than one further away from the camera.

So to solve the issue above we moved everything to Windows, which would kind of solve the issue. But we started experiencing lag in the regulation, which originated from lag in the image processing. After doing some more digging we drew the conclusion that there was a USB issue when using the Crazyradio at the same time as the Kinect v2. Once every couple of minutes the FPS for the video will drop really low (which results in CPU usage going down as well). But disconnecting the Crazyflie (i.e not using the Crazyradio) seems to solve this issue. To work around this problem we currently have a set-up where we use two laptops. Since we’re running ZMQ to communicate between the applications it’s a quick operation to split it up on multiple hosts. So the Windows laptop runs image acquisition and processing and the Linux laptop runs the control-loop and Crazyflie client for sending the commands to the Crazyflie.

When we were first developing this there was lost of things happening in the libfrenect2 repo, so this might be implemented now. Does anyone have any tips for this? We would love to be able to run the system fully on Linux with only one laptop :-)

During the upcoming months we will be attending both the New York Maker Faire and the Berlin Maker Faire, hanging around the Seeedstudio booth. So if you want to see the Crazyflie/Kinect demo live or just to hang out and talk to us then drop by!