We exhibited at the IEEE International Conference on Robotics and Automation in Singapore a couple of weeks ago.

We had a pre programmed path that we used most of the time, since it enabled us to start the demo and the leave the Crazyflie without any further manual interference from our side (except changing battery). The other option was to manually record a path for the Crayzflie to retrace by moving it around in the flying space. When we dropped it (detecting zero gravity) the onboard sequencer and controller took over to replay the recorded path. This mode was very useful when showing the accuracy and performance of the system by recording a short sequence of one point and just leaving the Crazyflie to hover. We had mounted a deck with two buttons on the Crazyflie that we used to chose which mode to use.

The code used for the demo is available at github for anyone to play with.

We also showed our brand new Flow deck that we will release soon. It is a deck that is mounted underneath the Crazyflie with a downwards facing optical flow sensor. The sensor is in essence what is used in an optical mouse but with a different lens that enables it to track motion further away. The output from the deck is delta X and Y for the motion of the Crazyflie and can be used by the onboard controller to control the position. We will publish more information in this blog soon. 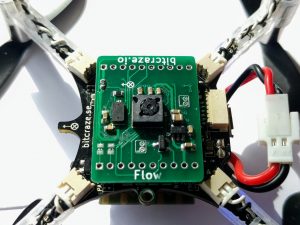 We had a great time talking to all you interesting, bright and awesome people. Thanks for all feedback, sharing ideas and telling us about your projects!