There have been a few requests from the community for a brushless Crazyflie and we blogged about a prototype we are working on a few weeks ago. The most common reason for wanting brushless motors is to be able to carry more load, in most cases a camera. A camera could be used for FPV flying or open up various image processing use cases like understanding the would around the drone using SLAM. Image processing on-board requires quite a lot of processing power and the CPU in the Crazyflie could not handle that, so more processing power would be required for a scenario like that. It is summer time (with a slight touch of play time) so we wanted to see what we could do with the CF Rzr and if it would be a useful platform for these types of applications. We hope that we might get some insights on the way as well.

We set the goal to try to add a camera, a small “computer”, the Flow deck for assisted flying, FPV capabilities and support for a standard RC controller.

We chose the Raspberry pi zero-w in order to get video processing and video streaming from the quad as well as more computing power. The Raspberry pi zero is not the most powerful board our there but it has a couple of advantage for our prototype:

For assisted flight and improved stability, the XY-part of the Flow deck works fine outdoors but the laser height sensor on the deck has a maximum limit of 1-2 meters, and further more it does not go well with direct sunlight. We decided to add an ultrasound sonar distance sensor to measure the height instead. The ultrasound sonar connects via I2C and was simply soldered to a breakout deck that plugs into the CF Rzr. 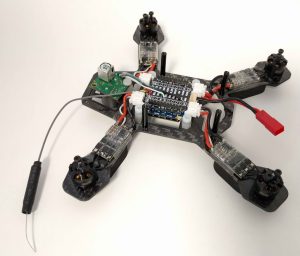 Crazyflie Rzr with ultrasonic sonar, breakout deck and flow deck mounted on the lower part of the frame

The first step is to see if we can physically fit everything on the frame. With some 3D printed mounts for the camera and the Raspberry pi, we think it starts to look pretty good. Next step will be to squeeze in the FPV video transmitter board, the RC receiver board and finally connect everything together. 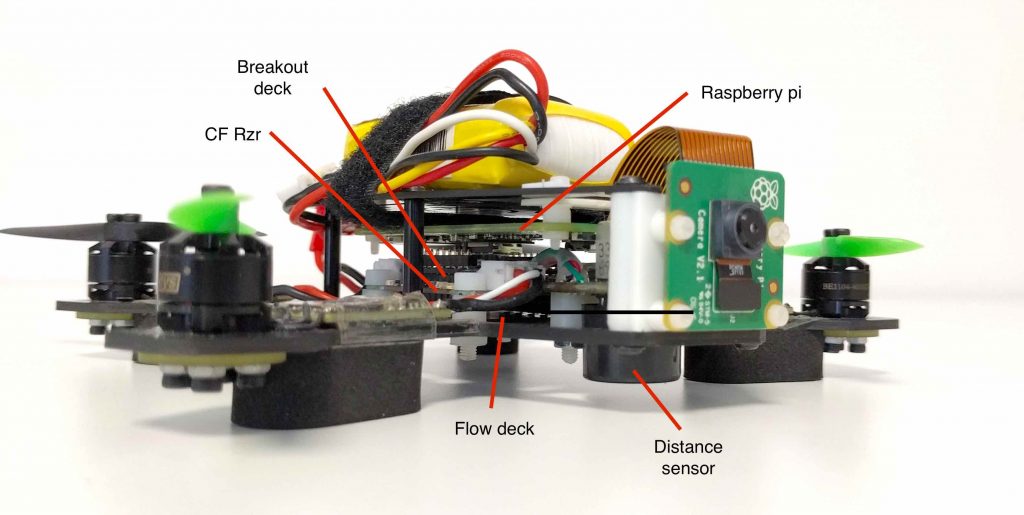 The current setup with everything mounted

We are far from done but it is a good start, and it is fun.