We announced the release of the Flow breakout board yesterday and we were happy to finally get it into the store. A few hours later we got some samples of the first production batch to the office and we discovered that we have messed up a bit.

First of all there has been a mixup when the pin headers were packed into the plastic bag, there are only 4 pins instead of the intended 10. We are sorry about this and if you get a bag like this, it is a standard pin header and the best way to fix it is to buy it in your local store. 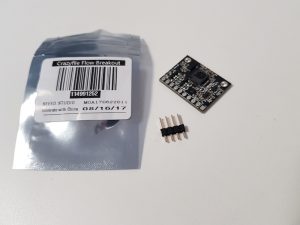 The second problem is only cosmetic, the print on the bag states “Crazyflie Flow Breakout”. The Flow breakout is not intended for the Crazyflie but can of course be used with virtually any other hardware such as an Arduino for instance.

We were very eager to get the Flow Breakout, with its awesome functionality, into the store as quickly as possible, but maybe we were a bit too fast. The problems will be fixed in the next batch and for those of you who get a bag with the wrong pin header, we are really sorry! We hope it will not be too much of an inconvenience.