Log and param are the two Crazyflie subsystems that have become the core means of communication with the Crazyflie. 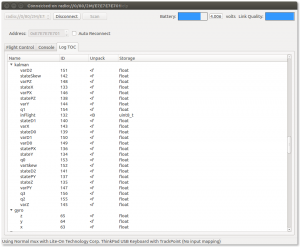 Param is a subsystem that contains functionality to get and set the values of variables in the Crazyflie. This is essentially the opposite of Log, it allows the client to read or write variables that are read-only in the firmware.

Both subsystems are based on a Table Of Content (the TOC): at connection time the client pulls the list of log/param variables. This means that there is no hard-dependency between client and firmware and that we can develop new functionalities in the Crazyflie, adding log and param variables to access it without modifying the client.

The Log and Param subsystems have served the Crazyflie community very well, allowing for quick development of experimental and new functionalities. There has been a limitation that has become more and more painful lately though; we were limited to 255 variables due to the protocol using only one byte to encode the variable ID. This issue has now been fixed in the Crazyflie firmware and in the Crazyflie ROS driver by a pull request from Wolfgang at USC. We have recently also implemented the required changes in the Python lib to make it available in the python client (and any other python script using the lib). In the process, some bugs unfortunately found their way into the code, but they have quickly been fixed by a pull request from simonjwright. Thanks to every one involved!

So now Crazyflie supports up to 65535 log and 65535 param variables. This time we should be good for the foreseeable future! ;-).