We are working hard in the Bitcraze team to prepare and get ready for IROS 2018 in Madrid next week. As usual preparing for fairs and exhibitions make us add useful features and functionality that we might not had planned to implement but that we find useful or need. Even though some of it might be a bit hackish, most of it will add value to the project and will hopefully be useful to the community. Notable functionality that we are working on this time: 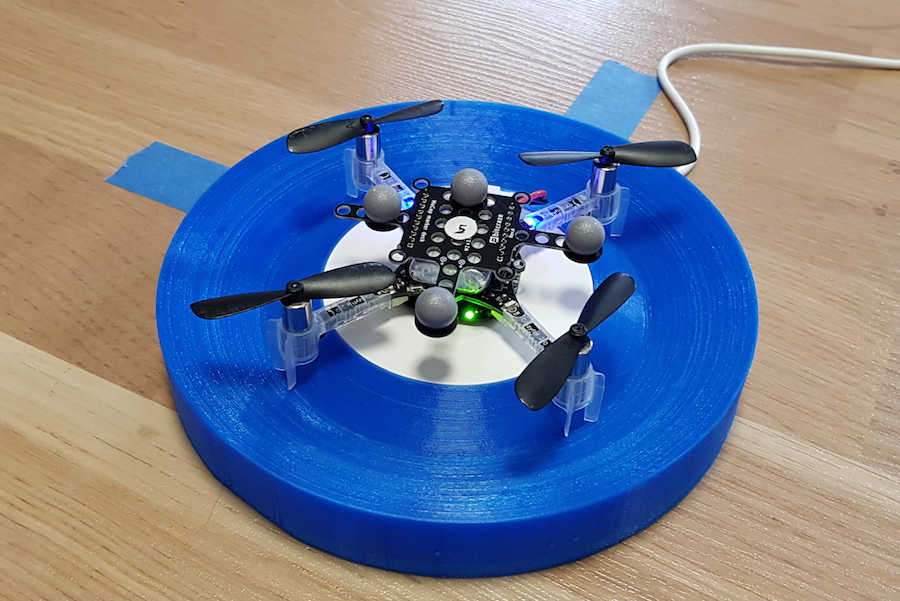 The plan is to fly a small crazyswarm with 6 Crazyflies using a motion capture system from Qualisys. Since we want to spend as much time as possible talking to people and minimize setup time, we were looking for a solution to automatically recharge the batteries between flights. We are planning to use Qi-charger decks for contact less charging with 3D-printed landing pads with slopes to make the Crazyflies slide into the correct charging position even if they land a few millimetres off.

Even though the Light House deck hardware still is very much experimental we have started to add support for it in the Crazyflie firmware. Hopefully we will be able to run our demos using either LPS or the Lighthouse to show the difference in performance.

Support for the high level commander in the python lib

The high level commander was contributed by Wolfgang Hoenig and James Alan Preiss (thanks!) an has been available in the Crazyflie firmware for a while. In an environment with positioning support it provides high level commands such as “take off” and “go to” as well as flying user defined trajectories and is used by Crazyswarm. We wanted to use the same functionality in our demo but running it stand alone in the firmware. The easiest way to get acquainted with the functionality was to play with it from python and as a side effect we implemented the API in the python lib for anyone to use. There is also an example script called autonomous_sequence_high_level.py in the examples directory.

For ICRA last year we wrote code in the Crazyflie firmware to fly trajectories autonomously. At that point we simply fed setpoints to the PID controller to make the Crazyflie follow a preprogrammed path. Now we have more tools in the Crazyflie toolbox (the high level commander and the Mellinger controller) and by using them we have reduced the amount of code needed and complexity of the solution while the performance has been improved (code on github).