We discovered a new key-chain video camera which is called the 808#16. It had gotten a pretty good review so we decided to give the video camera add-on hack yet another try. A while ago we tried it with a 808#14 but it didn’t work that well when we where running it directly from the Crazyflie battery. It shut down as soon as we used to much throttle and using a separate battery made it to heavy. We didn’t have to high hopes for the 808#16 either and when we discovered that the bare camera weight, no battery nor case, was about 9g we knew it would be at the maximum of what the Crazyflie could carry.  With high hopes we connected the camera directly to the Crazyflie battery terminal and gave it a try.

It worked! The camera didn’t shut down but as you can see the stability is pretty bad during take-off. Once in the air it is controllable but only barely. We haven’t tested the full flight time but it probably wont be more then 2-3 minutes. We are thinking of doing a test where we add 4 more motors “mirrored” directly underneath the existing ones to increase the payload capability. Would be nice to have that option and it should be fairly simple to do.

We are pretty impressed with the video of the 808#16 which still is very cheap. We bought the 808#16 camera with the D-lens which is a wide angle lens and that’s why the video has a bit of a fish-eye. 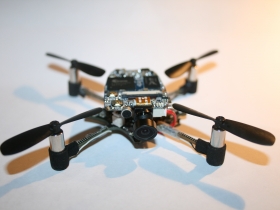 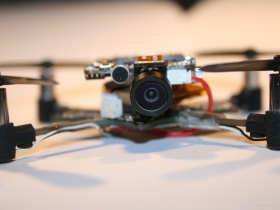 11 comments on “Another key-chain camera hack”