Early on in the Crazyflie 2.0 design we decided on using a double-MCU architecture. The main reason for this was to add Bluetooth low energy (BLE) to the platform to permit new use-cases like controlling the Crazyflie 2.0 directly from a mobile device. It just so happens that Nordic semiconductor some time ago released a chip that perfectly matched our requirement: the nRF51822 can run a BLE stack and is still compatible with the nRF24Lx1 that we are using in the current Crazyflie and Crazyradio. This nRF51 chip contains an ARM Cortex-M0 microcontroller, powerful enough to implement the radio functionality and power management, but not powerful enough to run a fully featured Crazyflie. The resulting system architecture can be seen here: 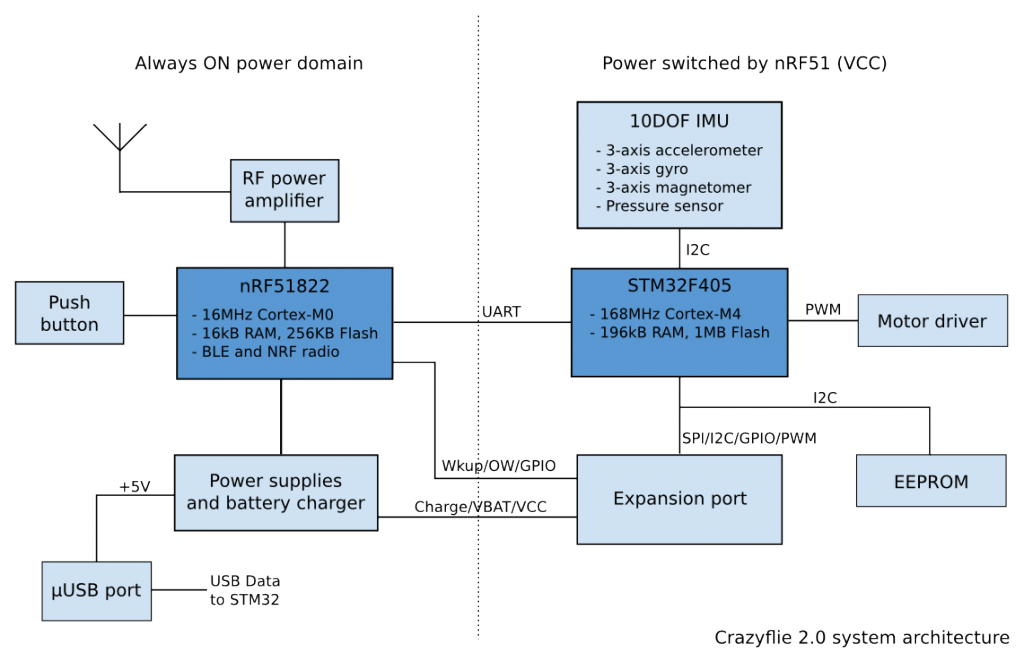 The two main tasks for the nRF51 is to handle the radio communication and the power management. We use the radio for both CRTP and BLE, but the hardware also supports other protocols like ANT. The CRTP mode is compatible with the Crazyradio USB dongle and it provides a 2Mbit/seconds data link with low latency. Our initial tests of the Crazyflie 2.0 implementation shows that the latency of the radio link is between 360us and 1.26ms, at 2Mbps without retry and a packet size of respectively 1 and 32 bytes. The main benefit of the CRTP link with the Crazyradio is that it’s easily implemented on any system that supports USB host which, makes it the first choice to hack and experiment with the Crazyflie. To that we have added BLE, mostly with the use case of controlling the Crazyflie 2.0 from a mobile device. The idea is of course to be able to fly easily and on the go with BLE, but we also see lots of opportunities for fun hacks and experimentation with mobile devices. One idea we came up with is to be able to place the mobile device up-side-down on a table and to autonomously hover the Crazyflie above it using the camera on the back.

One of the other particularities of the nRF51 chip is that it was designed to run from a coin battery, which means that it is pretty well suited for low energy operation. So we decided to give the nRF51 the responsibility for power management as well. In the current version of the Crazyflie we have a small chip handling the ON/OFF button and cutting power to the complete board. On Crazyflie 2.0 the button is connected to one GPIO pin on the nRF51 and power to it will never be cut, it just goes in “power down” mode. This permits to reproduce the current ON/OFF functionality and the button can be used for more function like long press and double click. We have also added the possibility to wake up the system from one of the pins in the expansion connector, which allows wake-up by an external source. It also adds more possibilities like waking up the system at regular time-intervals to perform some function.

We also updated the main MCU to a fast Cortex-M4 with a lot of memory. The CPU power is not a big limitation in the current Crazyflie, but the memory could become a limitation if users would like to implement new functionality that needs a lot more memory. We ran into this problem when we were trying to implement SD-card support for logging, as this required too big buffers. The new MCU has 196kB of RAM which should be enough for anyone (famous last words…). The MCU power will also allow for more computationally intensive algorithms, the first that comes in mind is sensor fusion between inertial sensors and the GPS data.

This amount of memory and computational power also open the doors for new things: the STM32F4 has a Memory Protection Unit, which allow to run tasks in a protected environment and intercept bugs before they can crash the full Crazyflie control firmware (like what  happens on PC operating system). One use of this could be to to allow for “user code” that runs in a protected environment to allow easier development of advanced behavior. As always this kind of functionality spawns lots of crazy ideas :-) The leading one is to run a Lua interpreter in such a protected task. If there was a good API that could be used from Lua you could imagine lots of fun stuff to do. Like adding a new board with sensors, reading them and then controlling the Crazyflie from that, without having to go into the actual control algorithms or risking to crash the firmware. This is of course still a dream but at some point in the future we will definitely give it a try (when we have the time for it that is :-) ).

Working with a system with multiple MPU is hard. As embedded system developer we know that, so we designed the Crazyflie 2.0 with at least some idea of how to limit the problems related to debugging two inter-dependent MCUs. We have defined as precisely as possible the responsibility of each MCU, which permits to develop and test things independently:

The nRF51 will act as slave and the STM32 as master. Using a radio bootloader it will be possible to wirelessly update the firmware for both MCUs.

We will write more details and post photos in the following weeks. Do not hesitate to tell us what you think about it, we appreciate all the feedback we get and we already have a couple of verification that we made after previous feedback (ie. radio latency and magnetometer usability).