During the design-phase of the Crazyflie 2.0 products last year, we sat down and had a long discussion about testing. In order to make sure things runs smoothly, it’s best to make sure that the hardware you’re designing can be tested properly in manufacturing. It could be as simple as adding a few test-points or a bit more complicated like making sure the product can run self-tests to cover some of the testing. There’s also other factors that count, such as the time it takes to test one unit. The better the tests are the less hassle you will get down the line and the happier your customers will be. The cost of finding a faulty board during production is very low, while finding faulty units in the field can be a costly process.

When it comes to the Crazyflie 2.0 we tried to think all of this though during the design-phase, walking though the schematic and making sure that everything could be tested properly in manufacturing. Since the new design is more complex then the old one, we also ended up with a test procedure with more steps and more things that could potentially go wrong. So we felt we needed some way to keep track of the products all the way from the production, to faulty units we might get from customers. Figuring out how faulty units might get passed the testing is crucial for improving it. But in order to acheieve this you need some way to track each board, thankfully for us this was already solved.

Both the Crazyflie 2.0 and all the decks fitted with a 1-wire memory have a unique identifier, a serial number. So these can easily be used for tractability. But without any information to trace it not very useful. So we built a simple framework for reporting as all of the test data back to our servers where we could easily look up what was happening. Here’s a screenshot of what it looks like for a tested Crazyflie 2.0 (1-wire memory products look similar): 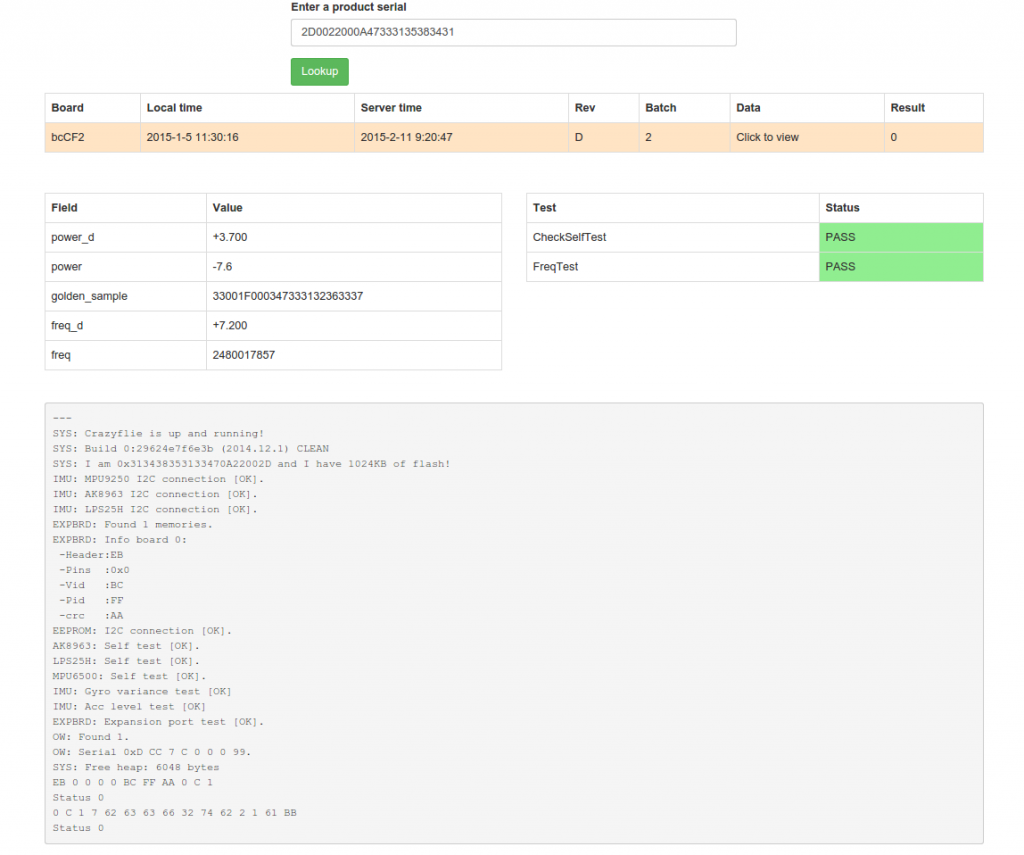 So what’s all the information? Well, here’s a quick rundown:

There’s of course a lot of other nifty features with having this setup, like getting production updates in real-time and being able to look at lots of statistics. All in all we’re pretty happy with the system, but there’s still lots of things to be added. Oh, and if anyone is wondering what happens if the internet connection is lost: It’s all saved locally as well (and uploaded when the connection is recovered). Plan for the worst and hope for the best :-)

If you’re interested in seeing what some of the rigs looks like, then have a look at this old post with some pictures from when we started up the Crazyflie 2.0 manufacturing.