A while ago we implemented something we called mux-mode for controllers, where the Crazyflie can be controlled from multiple controllers at once. Initially it was implemented the day before a “bring-your-kids-to-work” day at Minc (where our office is). The idea was that the kids would control roll/pitch from one controller and we would control thrust/yaw from another controller. But we would also have the possibility to take over roll/pitch by holding a button on our controller. It was a big hit and let’s just say the “take-over” functionality came in handy :-)

A couple of months later we started working with the Kinect v2 with the goal of automatically piloting the Crazyflie using it. Again the input-mux feature came in handy. Instead of having the kids controlling the roll and pitch, the autopilot was now doing it. This enabled us to work on one problem at a time, first roll/pitch then yaw and finally thrust. When we were finished the autopilot was controlling all of the axes and we just used the “take-over” functionality when things got out of control.

So far this functionality has been disabled by default, but last week we fixed it up and enabled the code. With this change we’ve renamed the feature to teacher/student and also changed the way mappings are selected for the client. Below is a screenshot of the new menu, but have a look at the wiki for more details. If you want to try it out, pull the latest version on the development branch. It’s a great feature if you know someone that want’s to try flying for the first time! 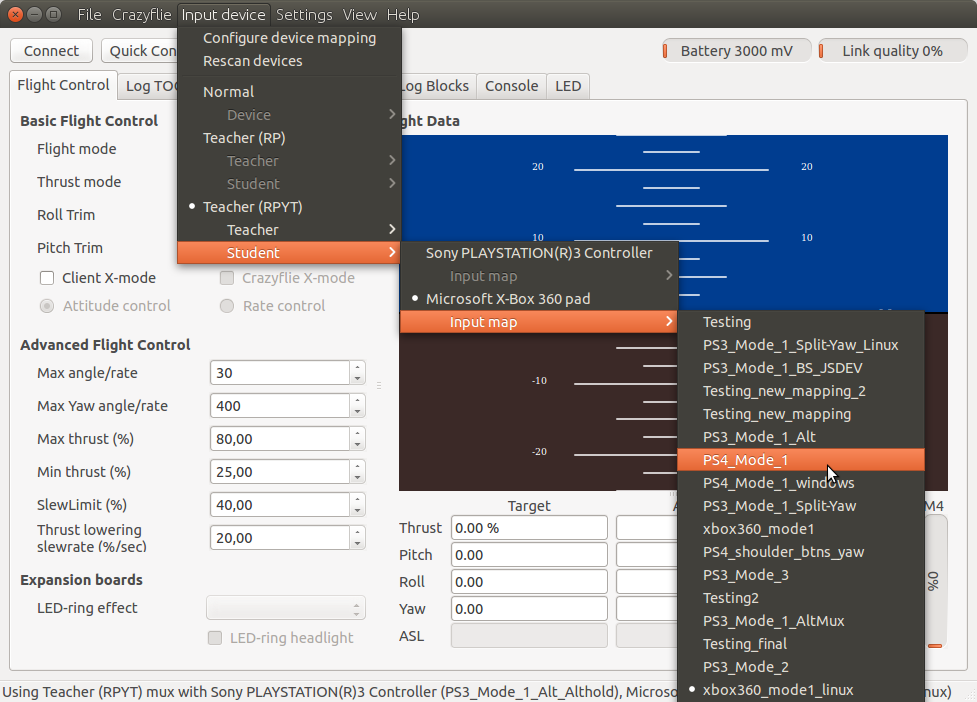 On a side-note we tried some other ways to mix the controllers, like one we called “mix-mux”. This would take the input from two devices and add them together, so if both give 25% thrust the total would be 50%. It was really fun to try, but impossible to fly (maybe we need to work on our communication skills…).